You might want to search a player by it's name quite often. For such cases (and many more "conversions") PlayerUtils provides a full set of conversion methods: 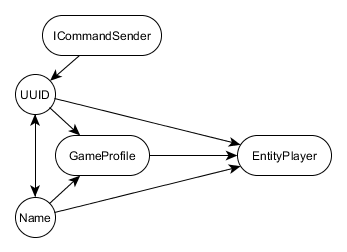 If no player is found null will be returned.

PlayerUtils is capable to convert any ICommandSender to an UUID, including console and command blocks. This UUID might not be a valid UUID of Minecraft but it can be used to identify it and additionally PlayerUtils:getName supports these UUIDs. Every Command Sender of one class has the same UUID.

All conversion methods have a range parameter that determines how broad the search should be.

Export
Back to top